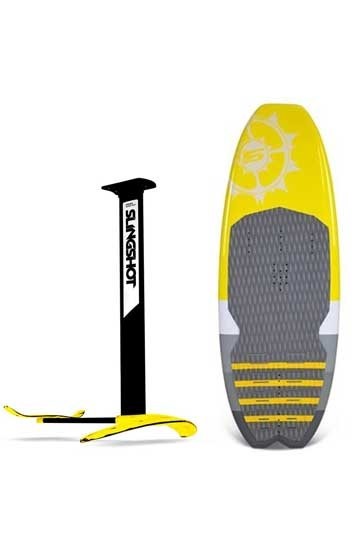 The Slingshot Hover Glide Nf2 in combination with the Alien Air 2018 gives you an ideal set for both beginners and advanced hydrofoil kite surfers.

Temporarly out of Stock

When it comes to hydrofoil kitesurf gear, Slingshot has been at the forefront for years. Slingshot was one of the first kitesurf brands to take it seriously and Slingshot has managed to maintain this development lead over other kitesurf brands. This attractively priced kitesurf hydrofoil set consists of the Slingshot Hover Glide NF2 hydrofoil and the Alien Air 4'8 "hydrofoil board from Slingshot. A super nice set if you can already foil or when you are just starting with kitesurf hydrofoiling and want to start immediately with a set which you will not get bored of.

The Slingshot Alien Air has a short, wide, thick design with a concave and a nice big rocker in the nose. All this ensures that you can easily learn to hydrofoil. Due to the wide and thick design, the Slingshot Alien Air has a large floating surface and a high volume. This allows you to easily ride on the Slingshot Alien Air without the hydrofoil wing pushing you straight into the air. If you are ready to ride on the wing above the water, the Alien Air 2019 is also your best friend. In the beginning you often go "pearling", you pop with the nose of your foilboard on the water. Due to the large rocker / scoop in the nose of the Alien Air, you will be less likely to make a thick nose dive than with other hydrofoil kite surfboards.

The Hover Glide NF2 from Slingshot is made for quick learning of foiling. This foil ensures that you can start easily, feel stable and have smooth maneuverability. The Hover Glide has been developed for all-round performance that makes freeriding possible in foiling. The mast and hull are made of aluminum, which makes it strong, robust and affordable. The Hover Glide has a 90-centimeter (35.5-inch) long mast and has a classic front-J wing shape. The result is an incredibly stable all-round foil with an average top-end speed. The Foil fits under all Slingshot foil boards such as the Dwarf Craft or Alien Air. You can divide the foil into three pieces so that you can easily take it with you.