Please sign in
The Core Sensor 3S bar is the standard core bar ideal for every kiter. It is kept super simple and that makes it so good. Through the live-wire connection you have a super direct steering response. New to the Sensor 3S Bar is the depower system with elastic depower line that contracts when you depower. 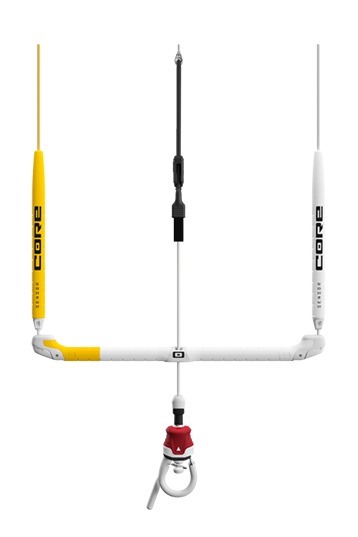 Intro The Core Sensor 3S bar is the standard core bar ideal for every kiter. It is kept super simple and that makes it so good. Through the live-wire connection you have a super direct steering response. New to the Sensor 3S Bar is the depower system with elastic depower line that contracts when you depower.

The new Sensor 3S combines the Sensor 3 and Sensor 3+ bar. The 24m lines of the Core Sensor 3S -Bar are divided into 18m, 4m and 2m. So you can adjust the line length as it suits you best. The Core Quick Release - the CIC (Core Intuitive Connect) can be released simply by pushing away the red Quick Release. It meets the highest standards. The Chickenloop is very easy to reassemble after releasing. Just push the end of the Chickenloop back into the Quick Release until it clicks, and it is fully assembled. This mechanism is so simple that you can do this even in the most extreme conditions without any problems.

The Sensor 3S has a smooth automatic untwist system for your power lines. So you don't have to manually untwist your lines after a kite loop or rotation. This happens automatically thanks to the ceramic swivel bearing. The lines come from the German kitesurfing line manufacturer Liros and are among the best lines on the market. The depower system has received new a handy cleat for simple and safe depowering. When the adjuster is tightened, the depower line contracts to a quarter of its original length and is no longer in your way when kiting. The end can be fixed to the cleat using velcro. The Core Sensor 3S Bar comes with a handy bar bag, in which you can always store and transport your Sensor 3S neatly.

The tips of the Sensor 3S bar have been rounded off. You can fold out the Stealth Winder to wrap the lines on it when you take it down. When you want to kite and the lines were unwrapped, you can fold the Stealth Winder back in and create round bar tips. This way you won't dent your surfboard when you hit your directional with the Core Sensor 3S. Thanks to the new Stealth Winder and the Live Wire system you can easily adjust the bar width from 50cm to 46,5cm. The new floaters are not attached to the bar, so the lines can move more freely. With the live wire you have then a very direct steering feeling which makes it also easier to control the kite only with one hand during board offs. The bar itself is equipped with a new Griploc tape. With a clear color scheme for right and left, it makes kiting much easier. There is also a clear stop indicator and a red line on the back. This can save you after a failed bar spin or also helps during setup.