1 reviews
The Duotone Neo 2023 now steers even smoother thanks to a shortened center strut and widened wingtips. Ideal for wave pros to beginner kitesurfers and from 'One-eye' to the North Sea conditions. Dominate every wave with the Duotone Neo 2023 kite! 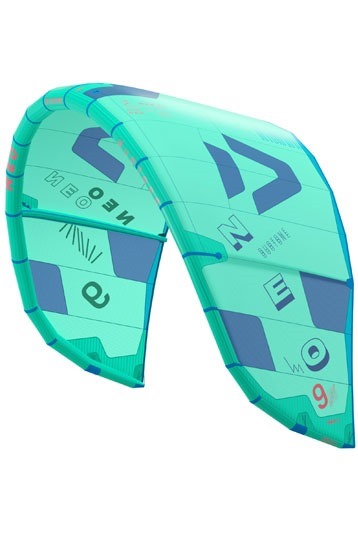 Intro The Duotone Neo 2023 now steers even smoother thanks to a shortened center strut and widened wingtips. Ideal for wave pros to beginner kitesurfers and from 'One-eye' to the North Sea conditions. Dominate every wave with the Duotone Neo 2023 kite!

The Duotone Neo 2023 is a super nice kite focused on wave riding and directional kitesurfing. The Neo is known for its slightly powerful character for firm bottom turns that will scare any wave. Whether you want to rip waves with or without straps, the Duotone Neo 2023 can do it all. With its very large depower range, good drift and super fast relaunch, this is the wave kite that you can rely on in the most extreme conditions from 'One-Eye' on Mauritus to the rugged coastline of South Africa, but also great for smaller Northsea conditions.

Besides the fact that the Duotone Neo 2023 is an ideal wave kite, the Neo is also very suitable for the the kitesurfe who is just starting. The same characteristics that make the Neo a very good wave kite provide a familiar feeling what you will love as a starting kitesurfer. Due to the large depower range on the bar, you can easily absorb hard gusts. In the beginning you will often send your kite into the water, the Neo will be relaunched before you know it because, for the wave rider the Neo must of course be out of the water before the next wave passes over your kite. In addition, the Duotone Neo 2023 goes very easily upwind, so that you will be spared the 'walk-of-shame'.

In short, the Duotone Neo 2023 is a super good wave kite that will give you the confidence to rip the world's highest waves. Super fast relaunch, lots of depower and a nice drift. The Duotone Neo is also an ideal kite to start with for the starting kite surfer.

Since the very first generation of the Neo, I love this kite. And believe it or not, this kite gets still better every year. It drifts very well, always gives a lot of feedback where it is and delivers a great amount of power. If you dare, you can even megaloop it! Read More